On 30 and 31 October a delegation from Quang Tri province (central Vietnam) visited the city of Nijmegen, at the invitation of the municipality of Nijmegen, The Economic Board and the European Foundation Joris Ivens. Ms. Ngo Thi Hoa, ambassador of Vietnam in The Hague, attended the meetings. In Quang Tri the Ben Hai River is situated on the 17th parallel, where Joris Ivens and Marceline Loridan-Ivens in 1967 shot the long documentary Le 17e parallele. The delegation was headed by mr. Hoang Nam, the vice-president of the Peoples Committee of ...

The Indonesian Diaspora Network Victoria is organizing an exhibition in the Immigration Museum in Melbourne about the international solidarity movement in Australia after the Proclamation of Indonesia's Independence, that united the communities of Indonesians, together with the local Australians, Indians and Chinese that we should celebrate. One of the activities during the weekend of 27-29th of May is the film screening of Indonesia Calling (1946) directed by Joris Ivens, which explores the refusal of seamen and waterside workers to man Dutch ships containing arms and ammunition for attack on Indonesia.

Indonesia Calling is not only a film about "The ships that didn't sail", it is also a film about an Australian society in which people from various countries and with various religious and political backgrounds can live together in harmony.

When the Pacific War broke out and Japan occupied Indonesia in 1942, Boven-Digoel prisoners were evacuated by the Dutch to Australia. The Digulists together with Indonesian shipmen and shipping workers, and the Australian trade union were successful in boycotting the Dutch ships that landed in the country, in order to support Indonesian Independent movement. They took direct action in blocking the loading of ammunition and equipment onto Dutch ships in Australian ports and banned Dutch ships in Australia from leaving the port to Indonesia with the intention that there would be no arms shipments to colonize Indonesia again.
The trade unions believed that the return of the Dutch to Indonesia violated the 1941 Atlantic Charter. The peace act focused on territorial rights, freedom of self-determination. A scene from the 1946 Joris Ivens film Indonesia Calling showing Indonesian seamen listening to a short-wave radio for news of Indonesia’s declaration of independence. Courtesy National Film and Sound Archive Australia.

For dock workers in Australia who come from various countries, this is a call to support Indonesian independence. At that time Australia took the most different attitude from its allied members by supporting the independence of  Indonesia, As its closest neighbour. Australia was the first foreign country to send envoys to Jakarta to welcome the proclamation. The envoys, Macmahon Ball and Joe Isaac, met with Sukarno, Hatta, Sjahir and a number of figures in the newly born Indonesian government, and expressed support for the Republic of Indonesia, which was facing the threat of an invasion from the Allies.
This was how trade unions, Indonesian diaspora and Australian government together supported Indonesian independence overseas. This was also the beginning of the Indonesian diaspora in Australia, aspiring to contribute to their homeland.

The Immigration Museum is located on the bank of Birrarung (Yarra River), this former administrative centre of immigration and trade is a site of great historical significance and complexity.The Museum has rich collections, exhibitions, events, education program and digital content. Explore themes of migration, identity, citizenship and community through multiple perspective. Address: 400 Flinders Street Melbourne, Victoria 3000, Date: 27 - 29 May 2022.

The Indonesian Diaspora Network Victoria (IDN VIC) is an incorporated independent and a nonprofit organisation for all Indonesian Diasporas living in the state of Victoria, Australia. As a chapter of global network, IDN VIC provides voice and medium for communities concerned with Indonesian development, and to channel the aspirations of Indonesian diasporas as well as to embrace the multiculturalism of Australia.

With sincere thanks to Anthony Liem. 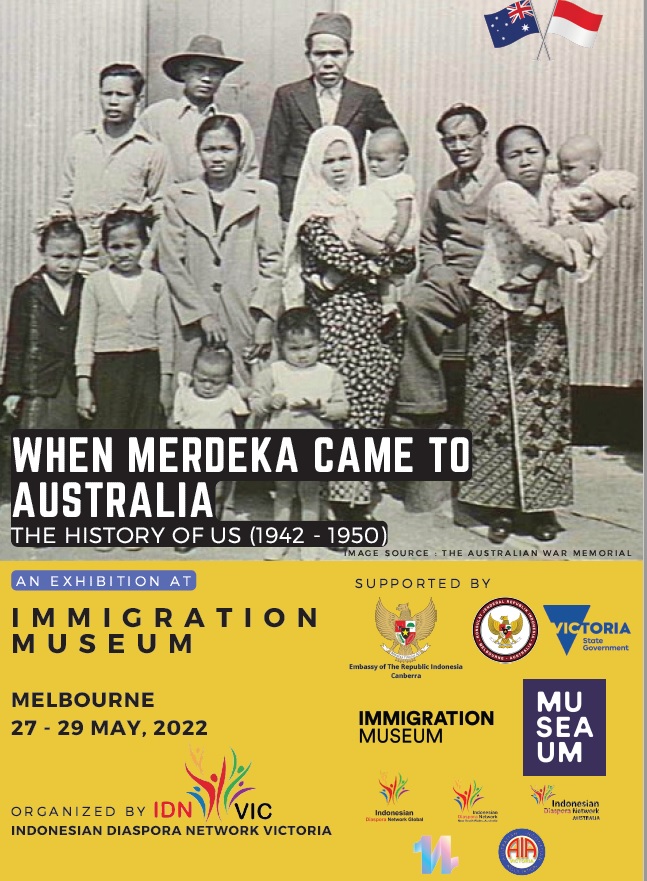 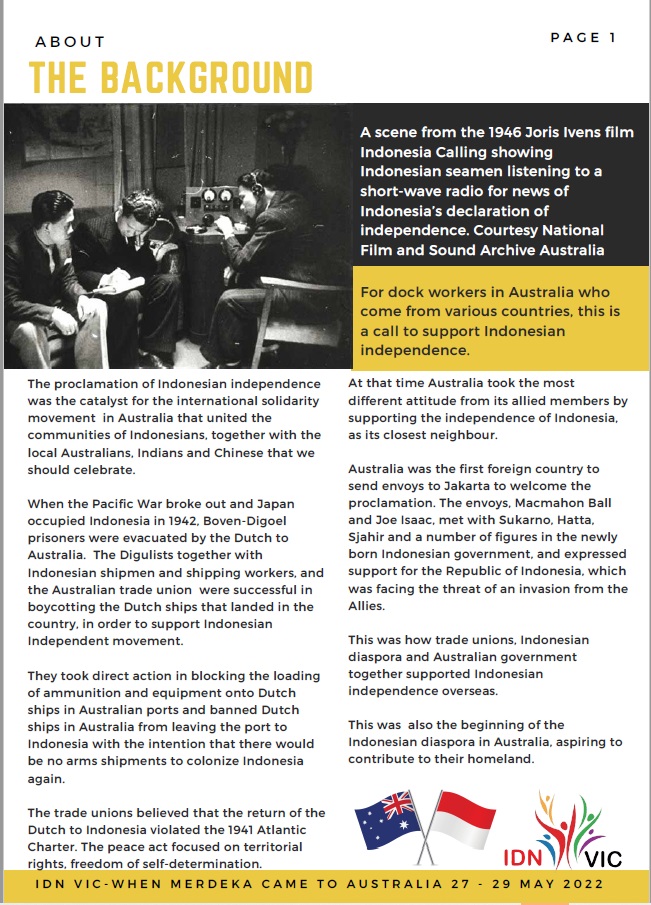 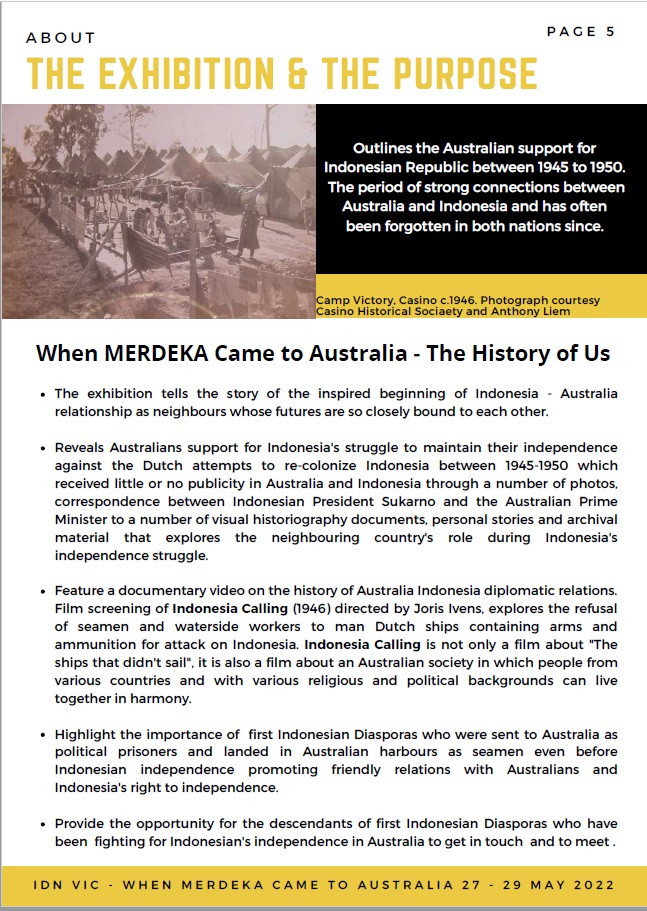 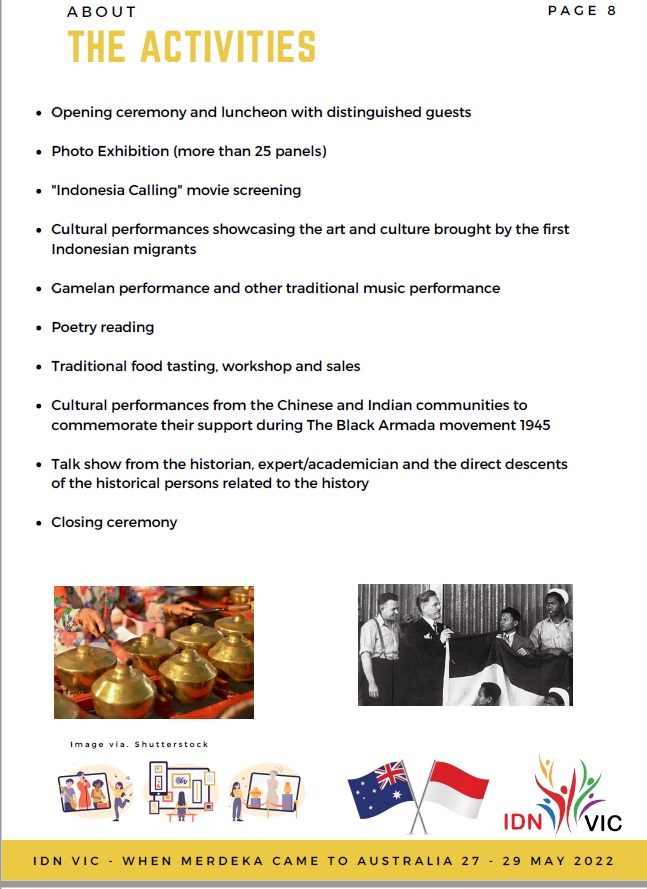