The Museum Het Valkhof in Nijmegen is presenting eleven art works, created by Titus Nolte, based on ten Republican soldiers as shown in Ivens' The Spanish Earth. The unica, aluminium panels with silk-screen printed and painted images, were commissioned by the museum at the occassion of the first big exhibition of the museum in 1999: 'Passages. Joris Ivens and the art of this century'. The artist granted the 11 art works to the museum, which will be on exhibit until 4 October 2015.

'I regard the Ivens-stills as a gift to the collection of the Museum Het Valkhof. The reason is obvious. Joris Ivens was  born in Nijmegen and the commission for this art work was created as a contribution to the Ivens-exhibition at the time', explains Titus Nolte to curator Frank van der Schoor. During watching Ivens' film Nolte was struck by the many different headwear of the Republican soldiers in the Spanish Civil War. Many of the volunteers joined the International Brigades. They came from many countries with different political views defending the legally elected  Republican government in their fight against Franco's army, which had the support of Hitler and Mussolini. The army of the democratric forces could hardly be called a regular army. The idealism and variety of these Spanish soldiers is shown by the variety of their berets, caps, hats and other headwear. Next to the ten portraits in color with a special graphic processing also one portrait is made in black-and-white. This soldier is not wearing a beret, but a helmet and is a soldier on the Franco side. He is symbol of the harsh war..
On display is also the authentic book The Spanish Earth from 1937 with the comment of teh Ivens'documentary, written by Ernest Hemingway, a loan of the Ivens Foundation.

The Spanish Earth in art
The Spanish Civil War inspired many artists. Even stronger: the battlefield not only was a military front -the testing ground for the Second World War-, but also a cultural front: the accumulation of the artistic avant-garde which got a militant character. The most famous heritage of the Spanish Civil War is Picasso's Guernica. The similarity in creative processes between Picasso's Guernica  and Ivens' The Spanish Earth is remarkable. Both art works were 'premiered' on 12 July 1937 in the Spanish Pavillion at the World Exhibition in Paris. The chairs of the film screening almost damaged the large painting of Picasso. Both art works were created during the same time, starting in January 1937 and finishing in July, under enormous time pressure and political tenses. Guernica has strongly influenced modern art, also because the painting was sent on a world tour to England, the United States and Europe. Ivens'documentary also had much influence, it paved the way for a new relationship between sound and image, due to the sober comment and voice-over by Hemingway.
Also Robert Capa's photo of the dying soldier, Hemingway's book For whom the Bell Tolls, Orwell's Homage to Catalonia and many other poems, photos, paintings and texts became iconic art works of teh 20th century.
New generations and contemporary artist continue with this tradition. The Spanish Earth, Hemingway, Dos Passos and Ivens inspired authors and artist to create a number of novels, films and art works. 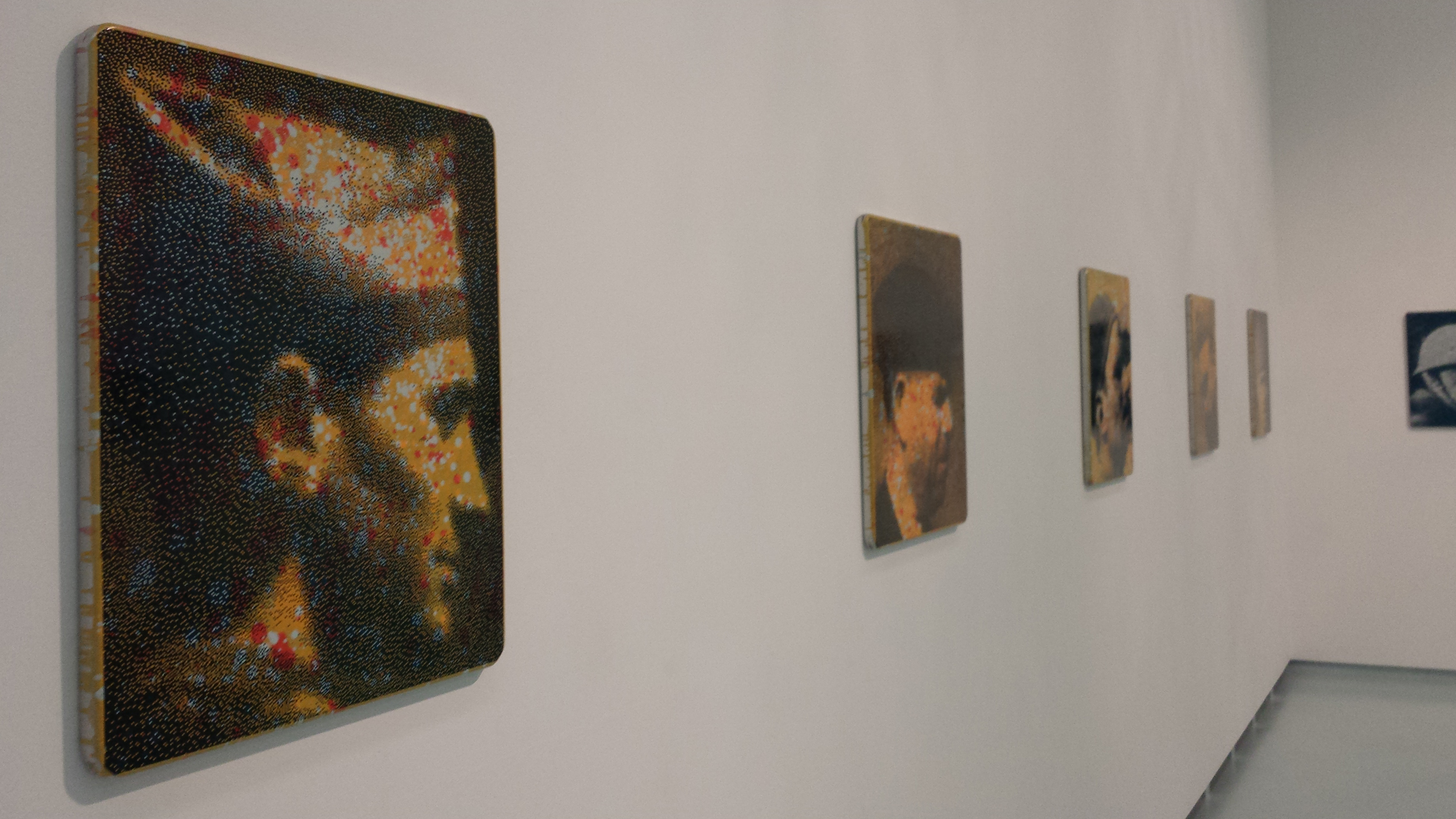 A part of the exhibition with the art works of Titus Nolte at the Museum het Valkhof (C) Titus Nolte, 2015 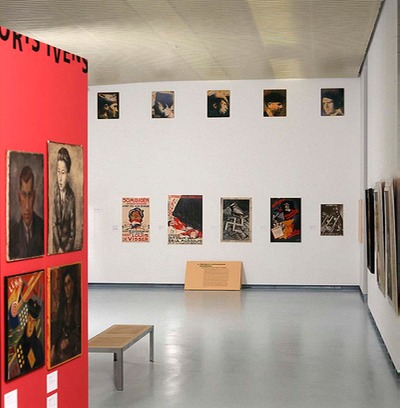 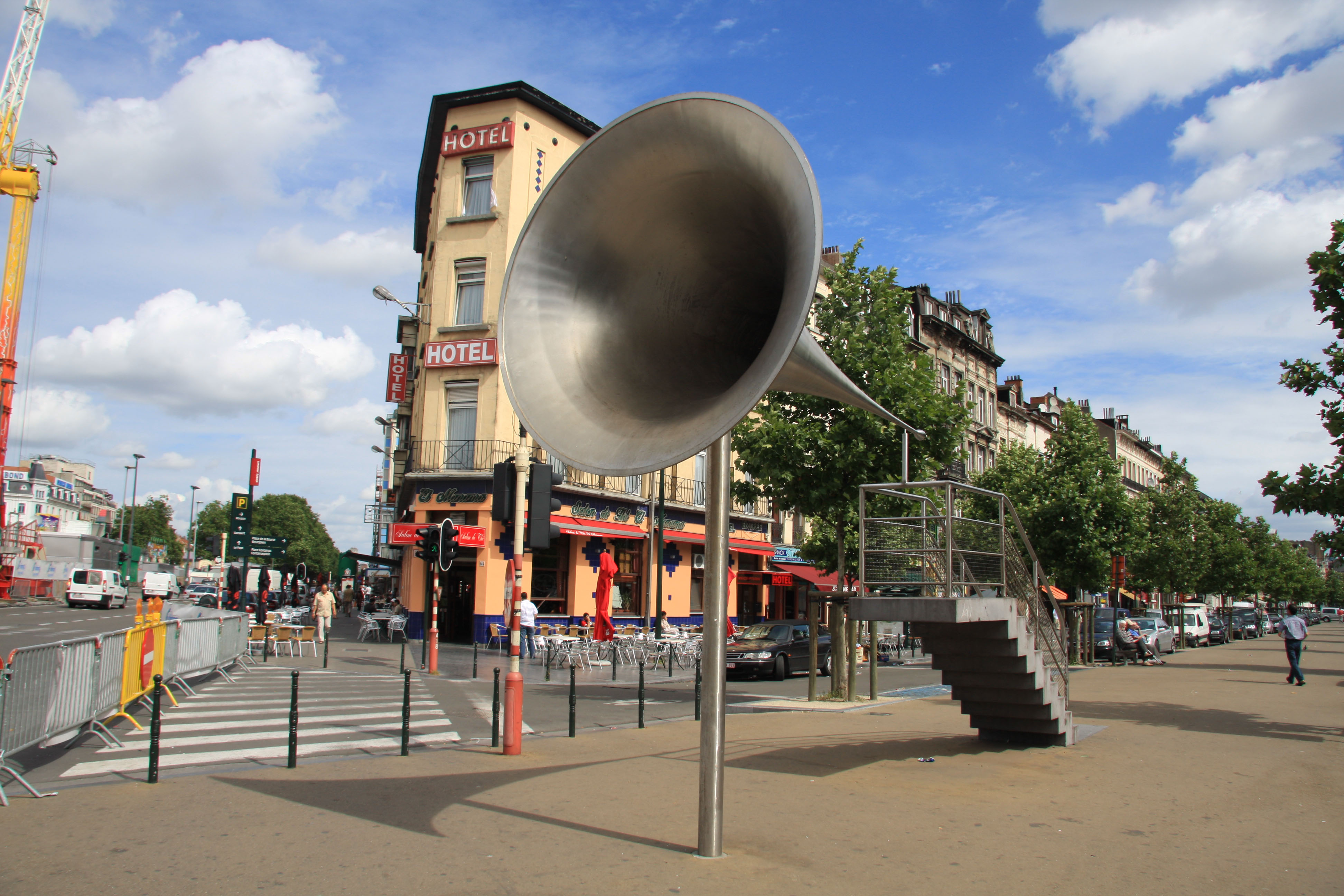 A large sculpture, also based on The Spanish Earth, in Brussels: 'La Passionaria Porte-Vox', by Emilio Menchero Lopez, 2006.