On 16th May 2014 the Federal President, Joachim Gauck, will open two new buildings, the Gropius House and the Moholy House at the Bauhaus in Dessau.

This inauguration will be accompanied by the exhibition 'Dessau 1945' in the Bauhaus building, which will run until 7th September 2014. In this exhibition 32 photographs of Henri Cartier-Bresson will be presented as well as parts of Ivens The Spanish Earth. The Bauhaus stands for Modernism, with enormous influences on modern theater, design, architecture, photography and the visual arts. Lees known is the history of Dessau and the Bauhaus between 1933 and 1945.

Early in 2014, the Gropius House/ Director‘s House and the Moholy House – the Bauhaus masters‘ houses that were destroyed on 7th March 1945, towards the end of the Second World War – will be rebuilt in an abstracted form according to designs by BFM architects
from Berlin. This will fill a gap in the ensemble of Bauhaus buildings and restore a missing piece to the world cultural heritage site while referring, in the abstracted architecture of the reconstructions, to the destruction in the meantime.  The exhibition aims to serve as a reminder, in conjunction with the repair of the war damage, of the situation and the circumstances of the buildings‘ destruction. The repair of the ensemble with new buildings reminiscent of the originals aims to remedy the damage and disfigurement, resulting from bombing in March 1945, of what is now a world cultural heritage site. In this context, it seems appropriate to refer to significant, related aspects of its history. The bombs that fell on the master house ensemble are connected with historical developments that reveal the Janus-faced legacy of modernism in Dessau. From the mid-Thirties onwards, the Bauhaus villas were mainly occupied by senior managers at the Junkers works (among them Karlheinz Kindermann, a test pilot) and in 1939 they were all sold to the Junkers works. From time to time, the masters‘ houses were penetrated by the intense odour of fumes from a nearby sugar refinery, where the pesticide Cyclon B had been manufactured from waste products since the middle of the 1920s. Junkers planes were used in German air attacks in Spain (such as that on  Guernica in 1937), the Netherlands and Poland, and in the first terror bombings of civilians during the Second World War. Tens of thousands of forced labourers were exploited by the arms industry in Dessau during the Second World War. Military equipment was manufactured in the workshops where, over ten years previously, prototypes for tubular steel furniture and other Bauhaus designs had been made. Towards the end of the war, Dessau itself suffered from big air raids. 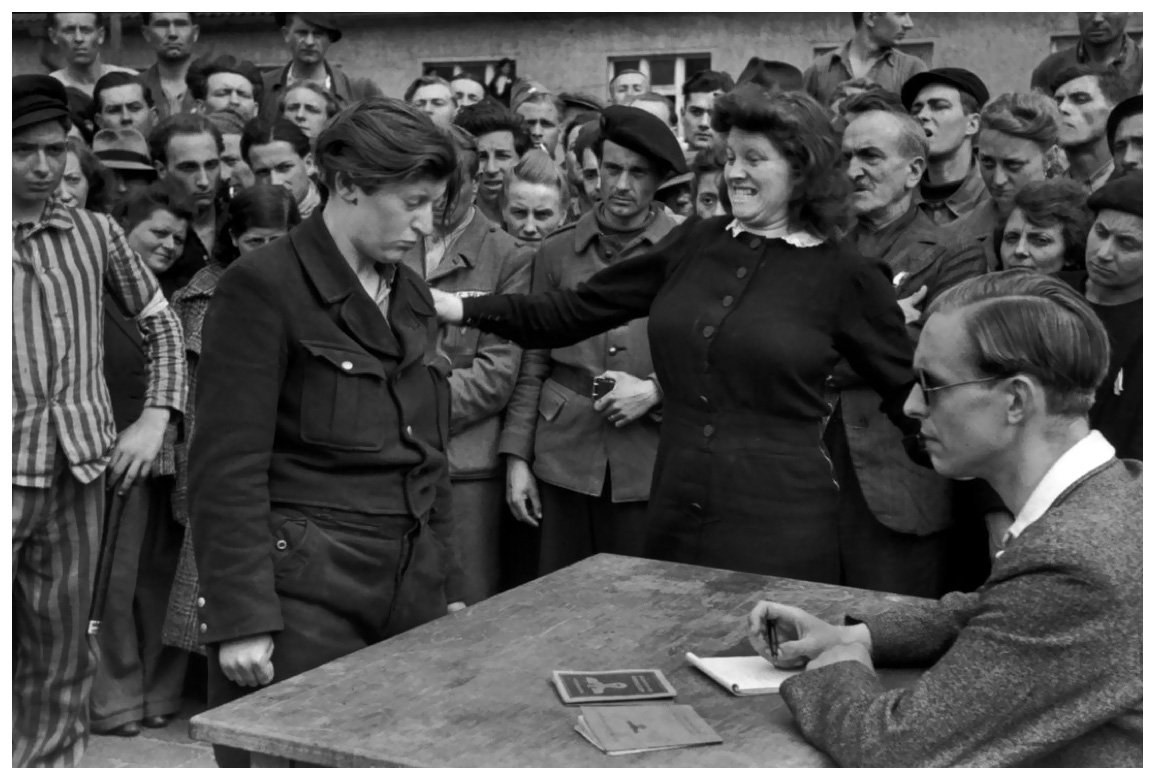 The documentary photographs by Henri Cartier- Bresson refer to these events in an artistic way. The exhibition should feature the 32 prints that are available from this series, as well as an excerpt from his film „The Return” (1944-45). In the spring of 1945, Cartier-Bresson recorded the repatriation of foreign forced labourers in photographs and on film. He had been a prisoner of war in Germany himself from 1940 to 1943 and had been forced to perform manual labour. He had managed to escape and had subsequently joined the French resistance as a photographer. At the end of the war, he wanted to create a documentary record of the repatriation of French forced labourers and prisoners of war; while preparations were being made, he was commissioned to do so by the American Office of Information. The main part of Cartier-Bresson‘s photographic reportage covers Dessau, where the American and Soviet forces met at the River Elbe in the spring of 1945. In the compensation process that took place between 2000 and 2007, former forced labourers gave testimony in support of their claims of exploitation. These forty-odd testimonies and previously unpublished video interviews with contemporary eyewitnesses are kept in the Dessau city archive; excerpts from them are to be published in connection with the exhibition.
The use of the master house ensemble by the Junkers works will also be addressed.

In particular, the exhibition will comprise the following sections:
1. Henri Cartier Bresson: On show in the basement will be the 32 photos by Henri Cartier-Bresson that are available on loan, together with an excerpt from his documentary film.

2. Dessau 1945. On the first floor of the workshop wing, the research done for „D essau 1945“ will be presented as a factual exhibition (not air-conditioned). The following sections are planned: The use of the Bauhaus buildings (main Bauhaus building and the masters‘ houses) from the closure of the Bauhaus in 1932 until roughly the end of 1945:
Departure/ expulsion of the Bauhaus.
Use by Nazi institutions, Junkers works.
Transitional use in the aftermath of war in 1945
Bauhaus members during the Third Reich.
Statistical analysis: emigrated, were murdered, stayed, participated
Representative biographies in cooperation with the DFG research project by Prof. Droste / Prof. Rössler
Arms production at the Junkers works (and possibly other) manufacturing facilities.
Types of military equipment produced, quantity, places of deployment
Excerpts from German propaganda films featuring them in action
Representative eyewitness accounts of them in action (aerial warfare) from different countries
Also Cyclon B: how much was used and where Forced labour in the Junkers works and possibly other forced labour sites, accommodation and places of work, statistics, working conditions and living conditions.
Bombing
Motives, strategic planning, objectives, operations, mapping, eyewitness accounts, possibly photos
The goal is a parallel mapping of these processes as a tableau, without constructing causal relationships, or interpreting connections beyond the given facts, (e.g. Junkers test pilot residing in the director‘s house).  Direktorenhaus).