On 30 and 31 October a delegation from Quang Tri province (central Vietnam) visited the city of Nijmegen, at the invitation of the municipality of Nijmegen, The Economic Board and the European Foundation Joris Ivens. Ms. Ngo Thi Hoa, ambassador of Vietnam in The Hague, attended the meetings. In Quang Tri the Ben Hai River is situated on the 17th parallel, where Joris Ivens and Marceline Loridan-Ivens in 1967 shot the long documentary Le 17e parallele. The delegation was headed by mr. Hoang Nam, the vice-president of the Peoples Committee of ...

It was the idea of the ambassador of Vietnam to organise this ceremony in her embassy in The Hague. The MC of the programme,. mrs. Bui Thi Nhan Loc, welcomed  the 70 attendants, family members of Ivens, ambassadors of various countries, diplomats, friends, members of the anti-war movement, of the Medical Committee Netherlands Vietnam,  filmmakers and others. In her opening speech the ambassador Mrs. Ngo Thi Hoa stressed the importance of Ivens' friendship during the harsh years of war, when Joris Ivens and Marceline Loridan-Ivens entered the war zone at the 17th parallel. The former Dutch ambassador of the Kingdom of the Netherlands, Mr. Gerben de Jong, underlined the danger both filmmakers went through and used in his speech some quotations of Ivens himself. André Stufkens gave an overview of Ivens career and presented new facts about Ivens relationship with Vietnam since 1945, based on source material. Conferring this medal to Joris Ivens was in fact an initiative of Vietnamese citizen themselves who attended the International Joris Ivens Symposium in Hanoi in November 2018. He thanked the Vietnamese governement, the ambasador and Vietnamese Union of Friendship Organisations (VUNO).on behalf of the board and showed his gratitude towards Ad Spijkers, Nhan Loc and the colleagues of the Vietnam Film Institute for the fruitful partnership.
Mr. Ad Spijkers, former FAO-UN official and adviser of the Ivens Foundation, compared the situation of Vietnam in the 1960s, when the anti-war movement started their campaigns with the current situation of the country. Nowadays 70 percent of the Vietnamese are born after 1975 and the role of the youth has to be highlighted for the next generation and the generations thereafter. Vietnam managed from a food shortage in the '70s to become second rice exporter in the world late '80's. The country is now an important player in South East Asia, a role reinforced by economic resilience, young population, strategic location, stability and active international cooperation. Since 2012, Vietnam is a middle-income country.
After the screening of Joris Ivens and the Wind of Vietnam Mrs. Annemiek Nooteboom received the Friendship Medal and the cetrificate of the Order of Friendship from the ambassador. In her vivid word of thanks she told some family anecdotes about a young Ivens which showed how clever he already was at an early age.
After the screening of the short reportage Rencontre avec le président Ho Chi Minh the reception started.. 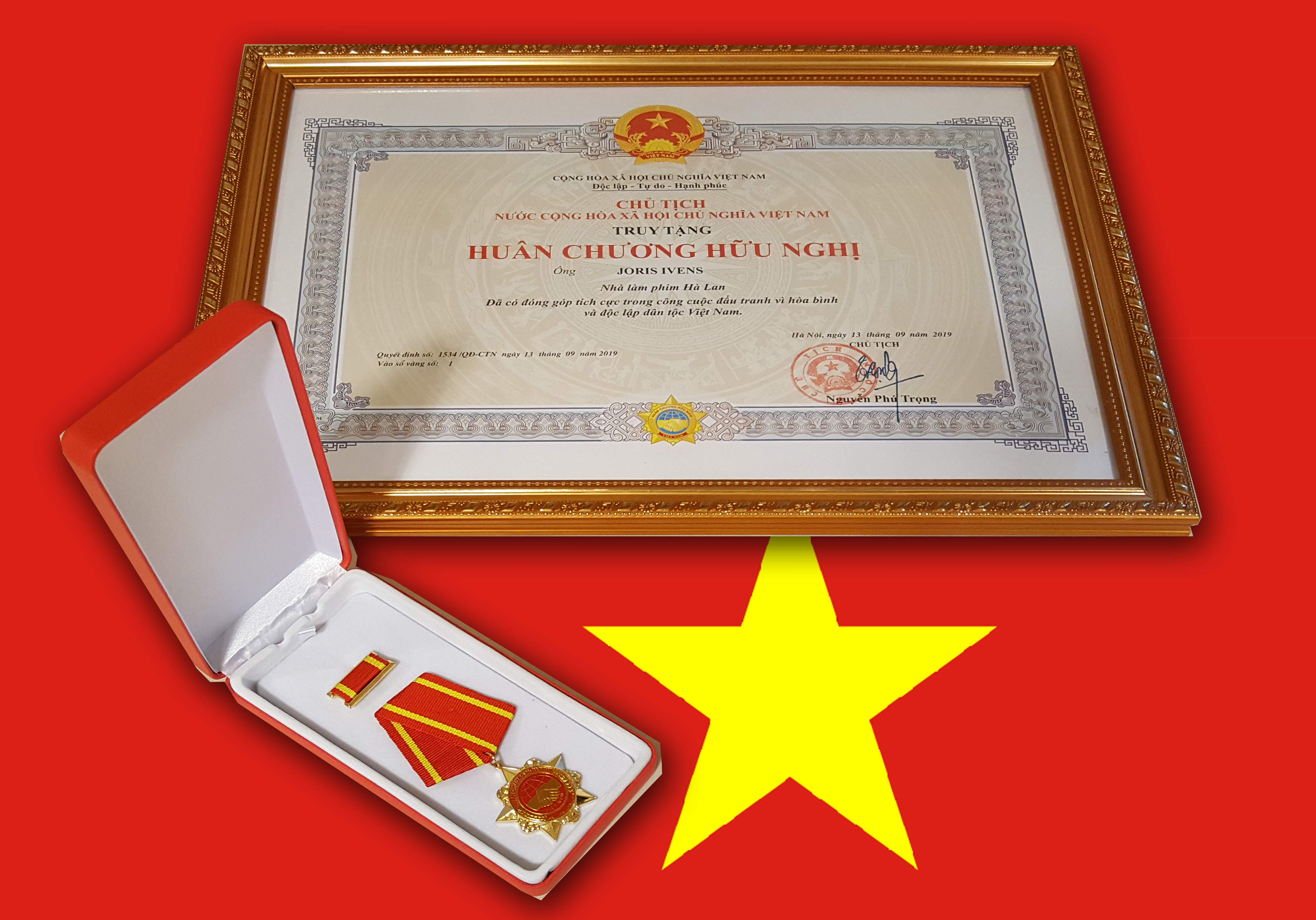 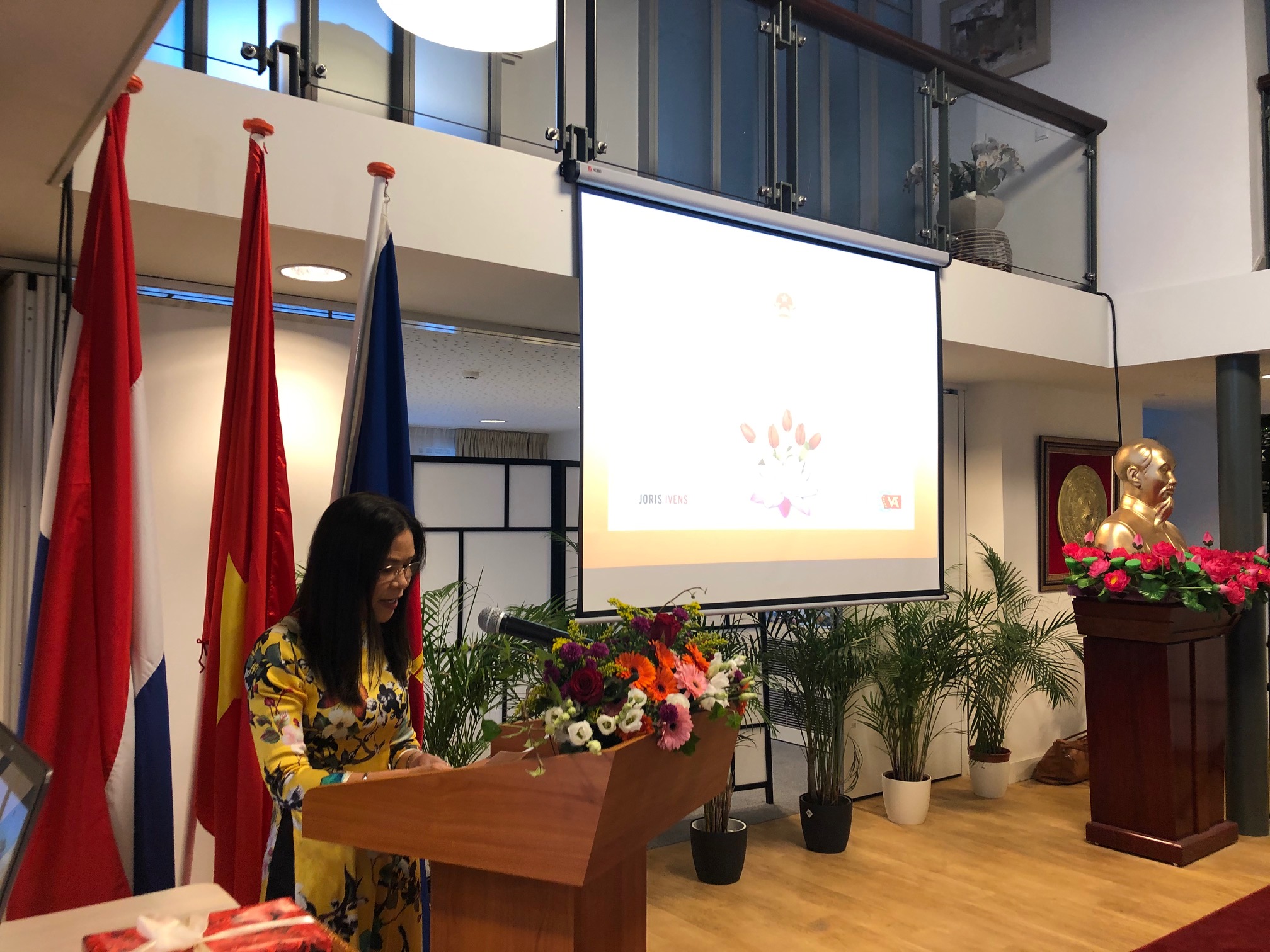 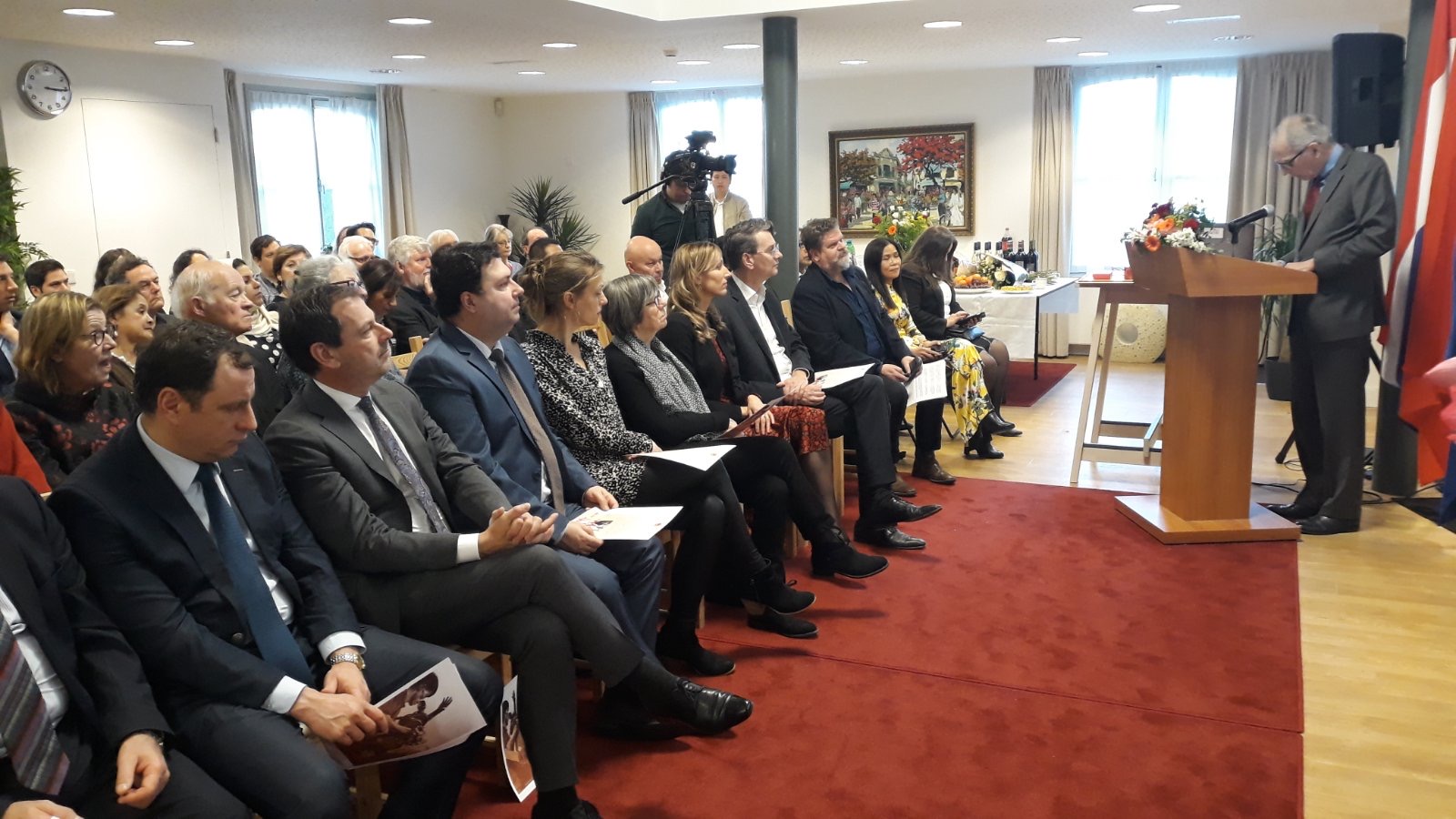 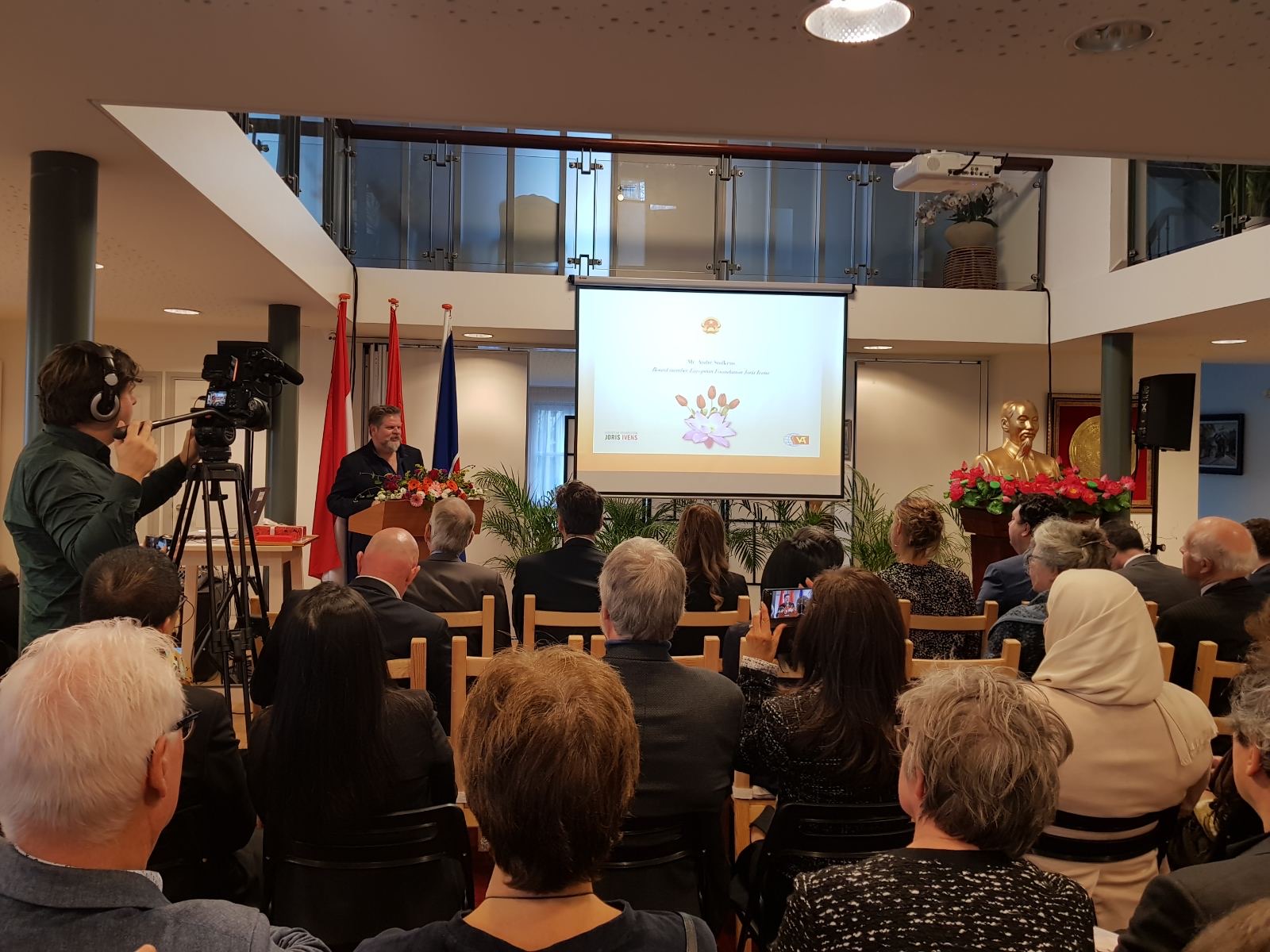 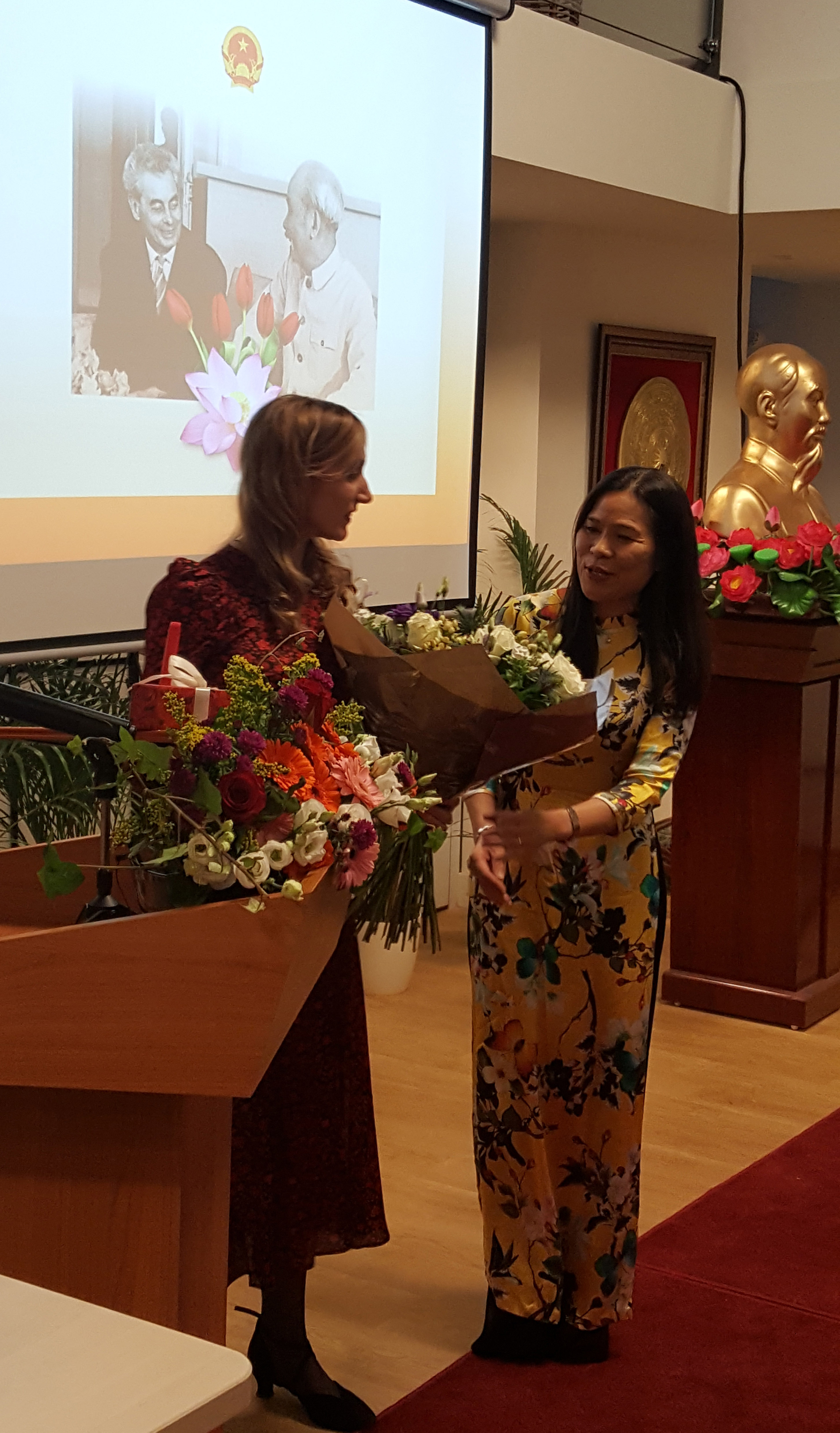 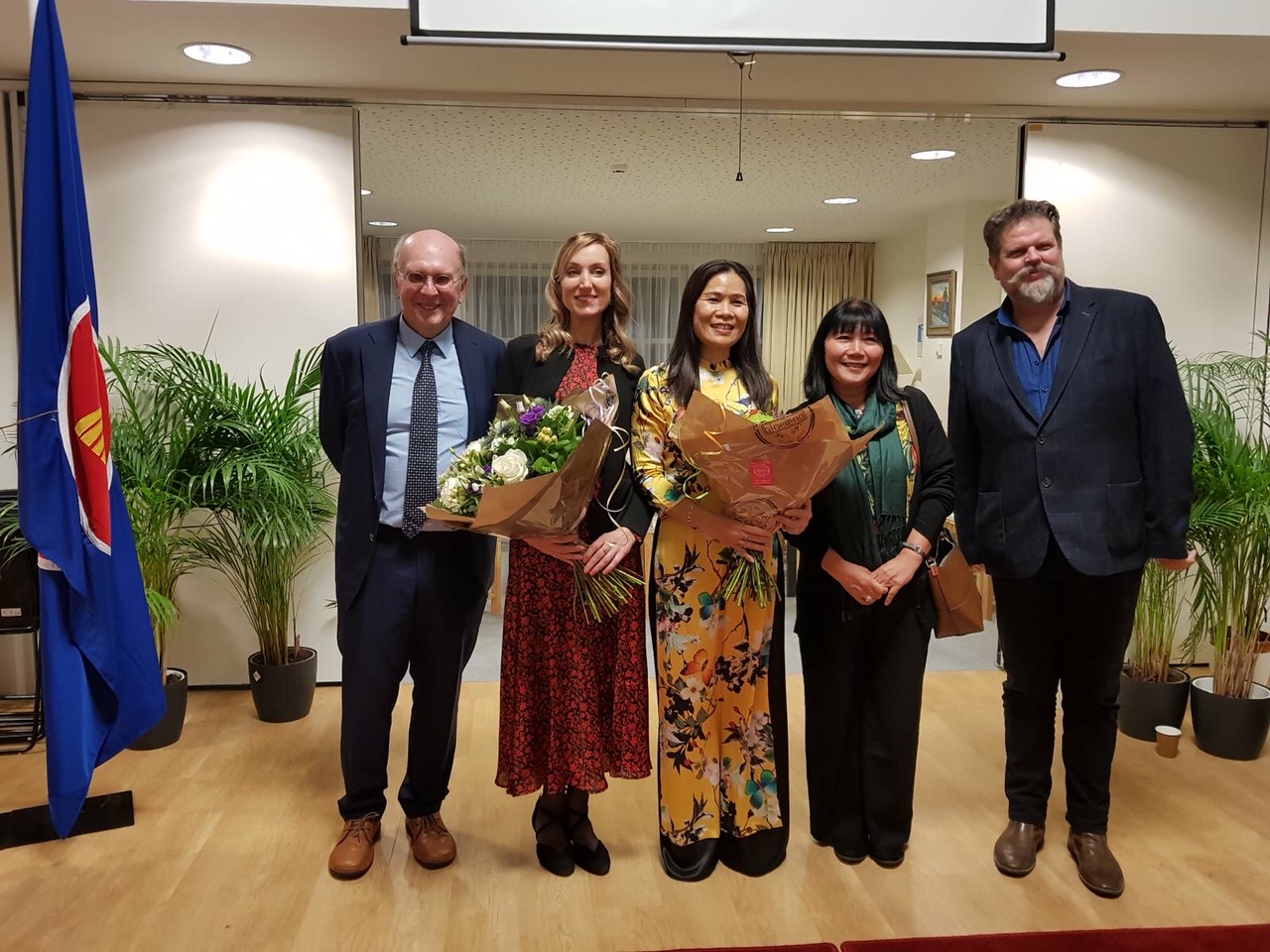