The director of the Vietnames Film Institute gave a precious present to the Ivens Foundation, when both FIAF-institutions met in Nijmegen on Thursday 30th of June. Mr.  Dao Quoc Hung (on the photo: second from the left side) handed over the found footage of Ivens' visits to Vietnam when Ivens started filmmaking durign the war against the US in 1965. Most of the footage concerns outtakes of Le ciel, la terre (1966) and various meetings in North-Vietnam. Next year the Vitenames Film Institute will commemorate the 50th anniversay of The Threatening Sky (Le 17e parallèle) with a conference and retrospective.

The delegation of the Vietnames Film Institute consisted of Mr. Dao Quoc Hung, Director of Vietnam Film Institute, Ms. Nguyen Anh Tuyet, Chief Accountant of Sub Archives in Ho Chi Minh city, Ms. Nguyen Thi Hong Hanh, Deputy Director of Sub Archives in Ho Chi Minh city and Mr. Le Tuan Anh, Technician. The meeting was prepared during several months by Mr. Adrian Spijkers. During the visit  the delegation saw various film posters, photos, stills, and documents  from the Joris Ivens Archives related to his visits, together with Mrs Marceline Loridan-Ivens, to Vietnam between 1965-1975.
Mr. Dao Quoc Hung recognized various people presented in photos and documents form that period.
The Vietnamese Film Institute started in 1975, after the liberation, and created two premises: in Hanoi and Ho-Chi-Minh City. It was Ivens who started and supported massive solidarity campaigns in the 1960’s to raise money and film editing equipment for the Vietnamese film crews and studios.

Mrs. Xuan Phuong, at first doctor, became the interpreter of Ivens and Loridan-Ivens during the shooting of Le 17e prarallèle. Thanks to the inspiration of both filmmakers she herself started filmmaking documentaries. On Wedensday 29th of June Adrian Spijkers mae a film interview with her in which she is talking about her life.

In 2017 the Vietnamese Film Institute is aiming for a retrospective filmprogramme of Ivens  and a study conference with Vietnamese film scholars reflecting on the four Vietnames film Ivens and his wife made in those years. 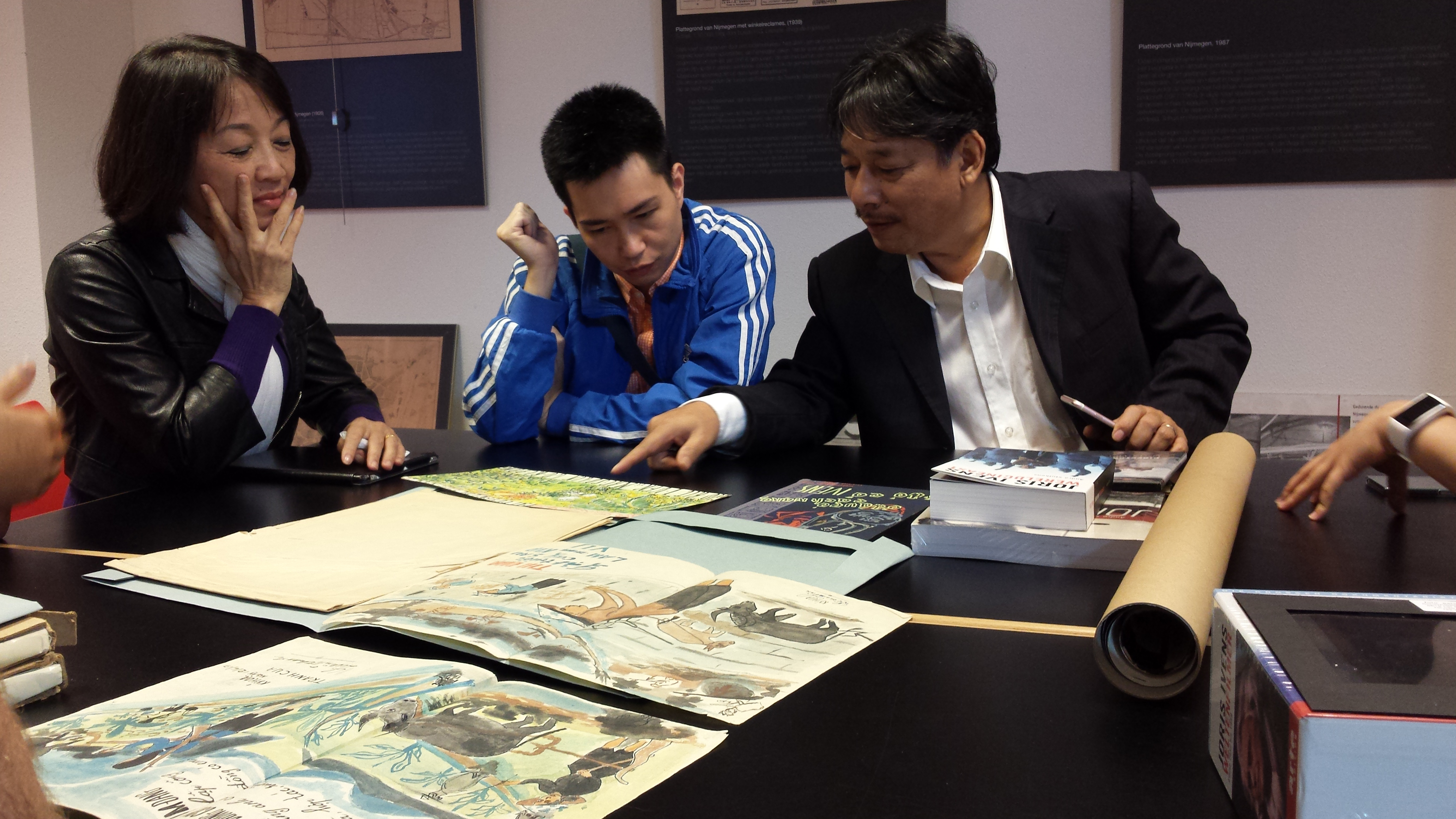 Mr. Dao Quoc Hung, Director of Vietnam Film Institute, at the Joris Ivens Archives, pointing at a drawing from a Vietnamese artist.