On 20 August Mr. H.E. Nadjib Riphat Kesoema, Indonesian Ambassador in Canberra, Australia, will open the exhibition ‘Black Armada / Armada Hitam’ at the National Maritime Museum in Sydney. It is about the support of the fight of independence of the young Republic of Indonesia by black banning Dutch ships in the harbour of Sydney, as presented in Ivens’ film Indonesia Calling (1946). On 31 August the Indonesian and Australian Ambassador will open the Indonesian version of this exhibition at the Benteng Independence Museum in Yogyakarta. 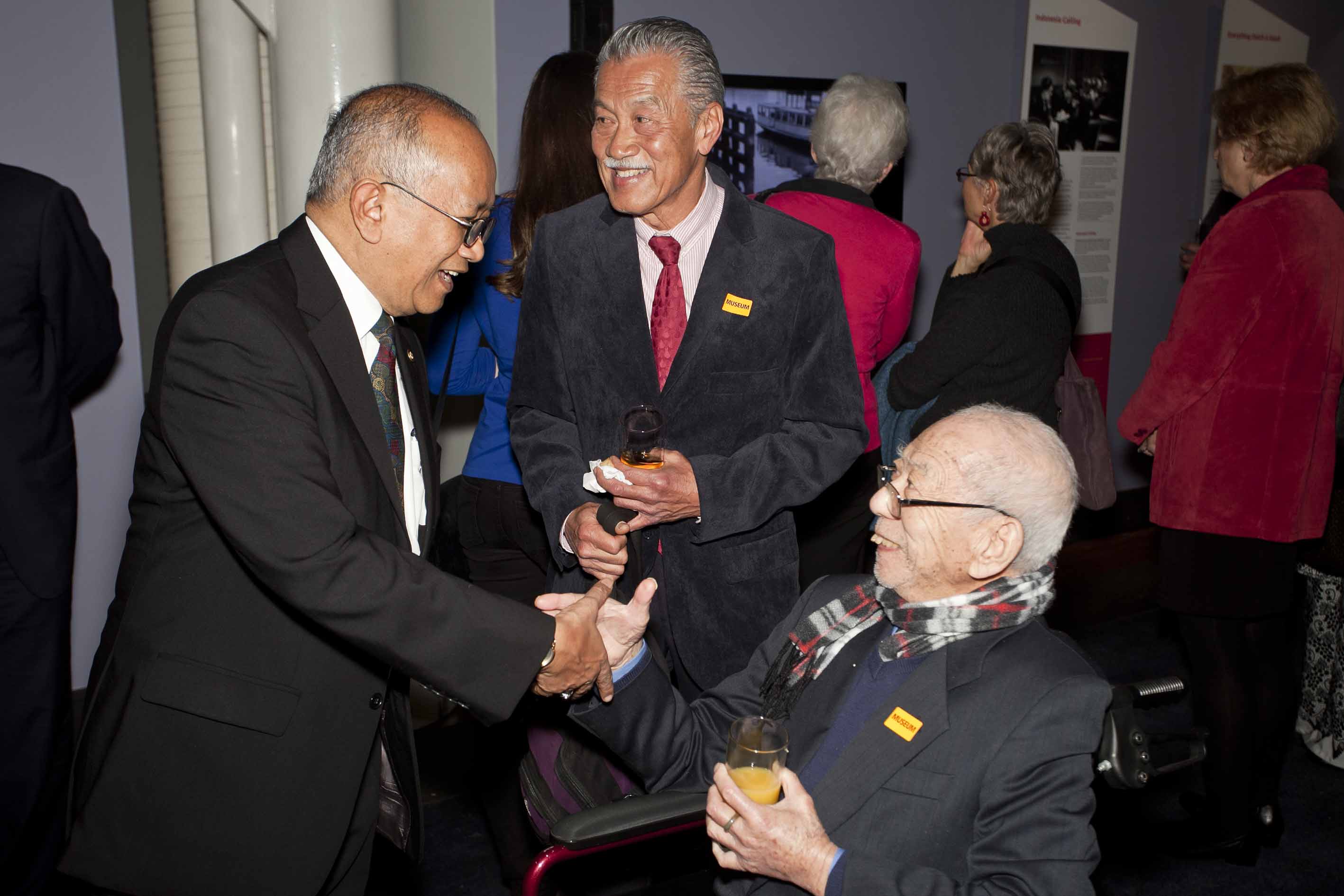 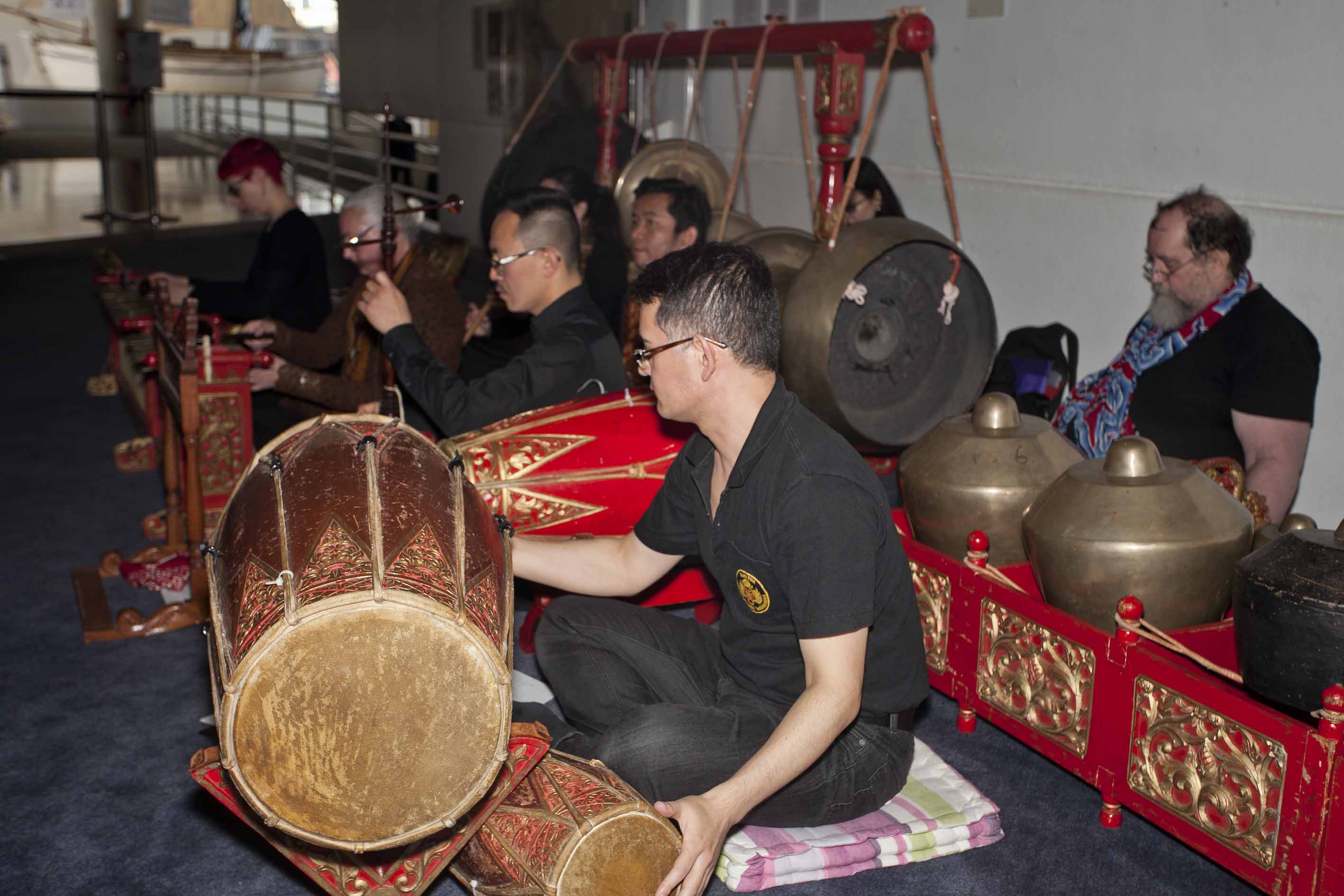 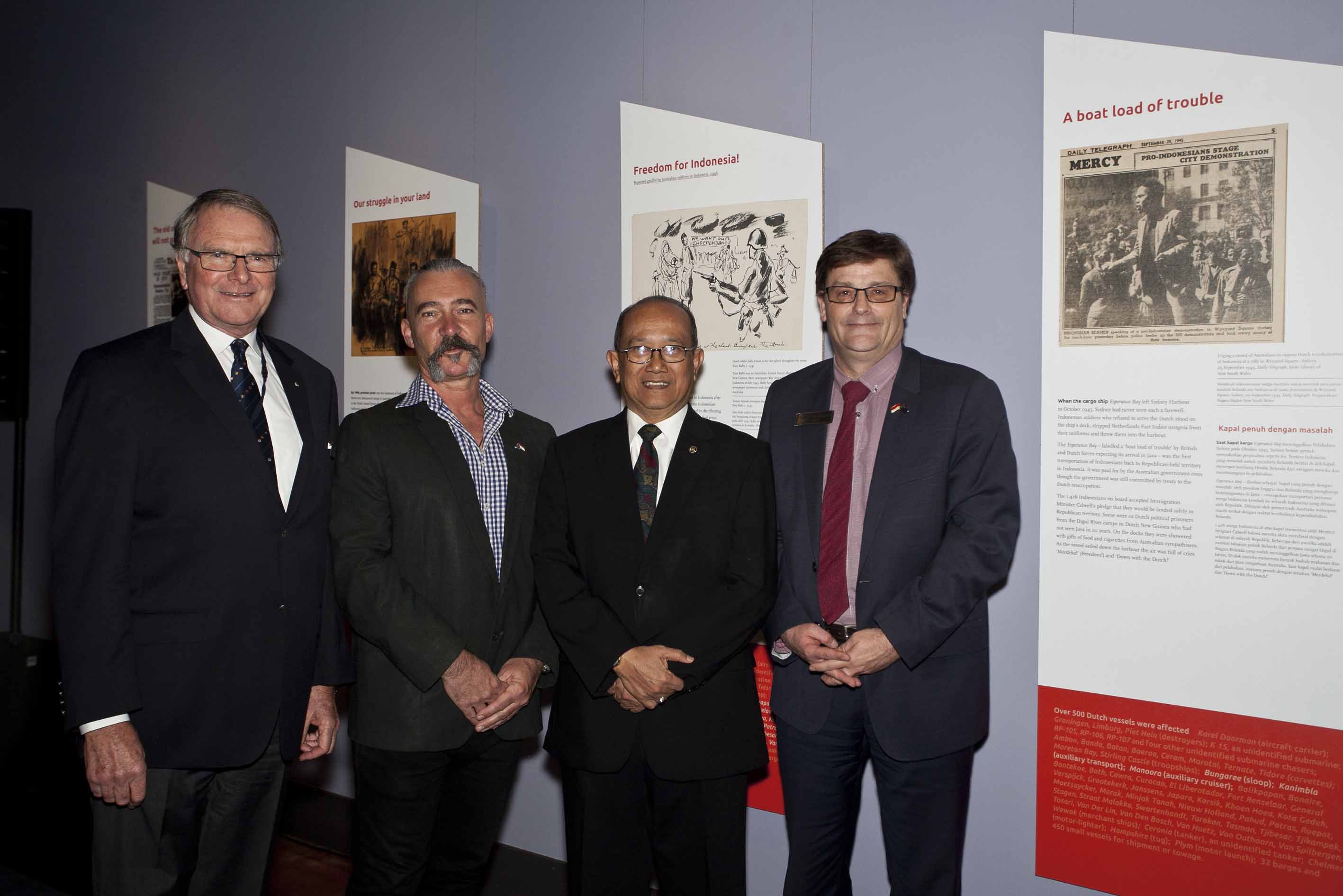 Mr. Nadjib Riphat Kesoema, Indonesian Ambassador in Canberra, shaking hands with Arthur Locke (92), who appears in Ivens' Indonesia Calling!, and Mr. Anthony Liem. During the opening of the exhibition on 20 August at the Australian National Maritime Museum.  The Langen Suka, a Javanese gamelan group provided the background music, in honour of the display of the gamelan Digul. This gamelan was brought to Australia in 1943 by the Indonesian political prisoners from Boven Digul/ Tanah Merah near Merauke in Papua.
The opening was also officiated by Peter Dexter, ANMM Chairman and Kevin Sumption, ANMM director and Chairman.

Black Armada
On the exhibition panel its heading is 'Indonesia Calling' and on it is: ‘Not quite everything Dutch was 'black listed'. A lone but significant figure was working with Indonesians to tell the world about their struggle- and support from Australians.Dutch film maker Joris Ivens resigned his position as Film Commissioner for the Netherlands Indies Government.’
The 1946 film of Joris Ivens in Sydney harbour about ‘the ships that didn’t sail’: the black armada, shows the start of the spontaneous actions in October and November 1945, only a few months after the declaration of independence of Indonesia by president Sukarno on 17 August. These actions involved the Australian Maritime Unions together with the Chinese and Indian seamen and lasted for many years.
In Sydney a part of the authentic gamelan Digul, featured by Joris Ivens in Indonesia Calling! in 1946, will be at the exhibit. This bonang was made from cooking utensils, tin cans and packing cases in the Boven Digul camp, a Dutch prison for political prisoners in the depths of the New Guinean jungle. 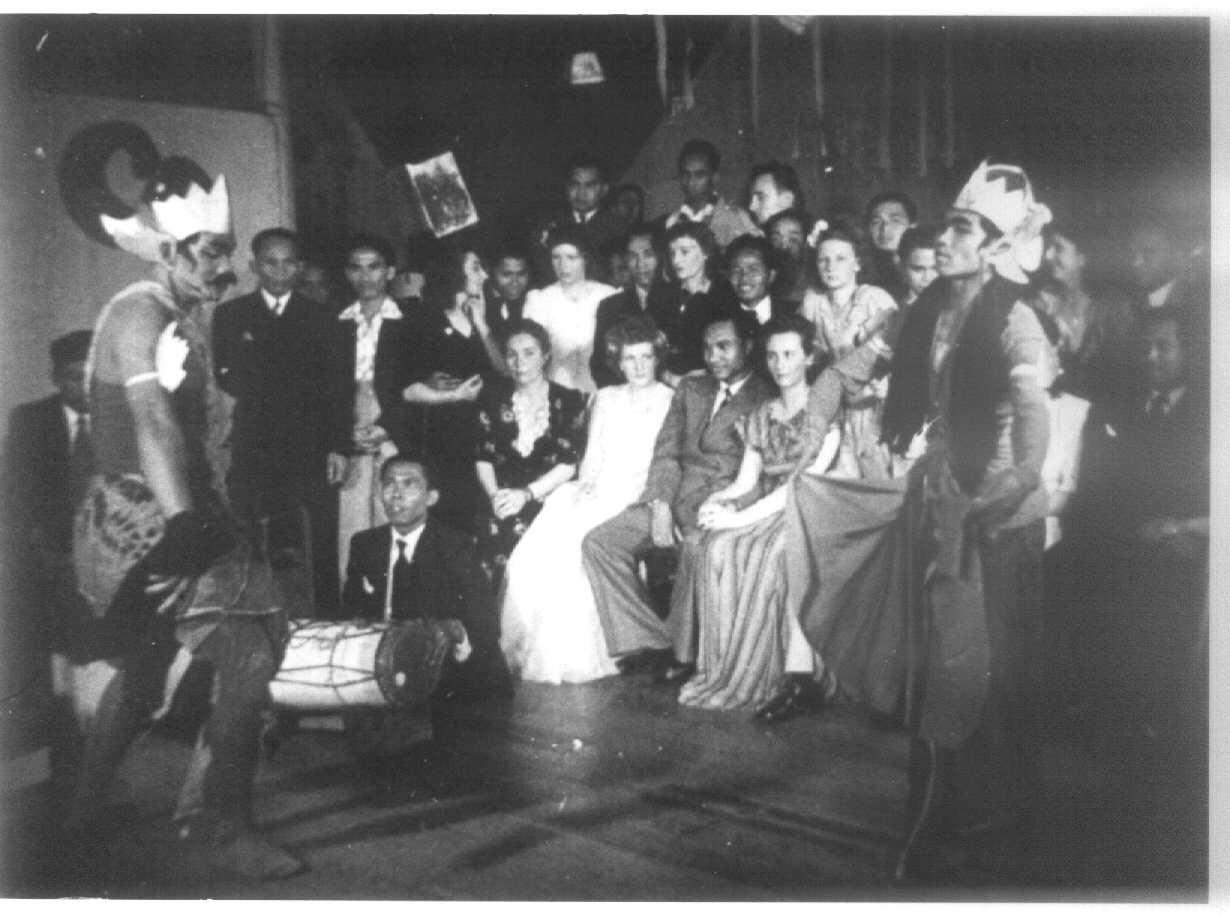 Still from Indonesia Calling! showing the dancing sequence with Indonesian, Australian, Indian and Chinese seamen, in which the Digul gamalan can be seen and herad. (C) Joris Ivens Archive / EFJI.

Improving relationships between countries
The initiative of both exhibits derive form the Indonesian Ambassador who expressed his wish that events like Ivens’ documentary Indonesia Calling! should be incorporated in the Indonesian Independence History Record. He proposed and advised a permanent exhibit at the Museum of Indonesian Independence in Yogyakarta. The exhibition is also part of the commemoration of 'Merdeka 70', the 70th aniversary of Independance Day.

He emphasizes that initiatives like above would raise awareness of past close links and provide a major opportunity to improve today’s bilateral relationships the two neighbouring countries: Indonesia and Australia.
It proofs again the importance of the Ivens’ short film, made on a crucial historical moment relating the histories of Indonesia, Australia and The Netherlands. 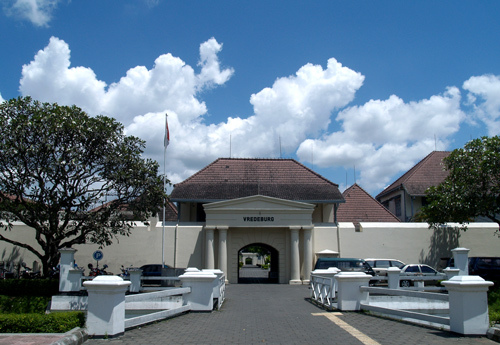 Castle Vredeburg, a former colonial fortress in Yogyakarta, the housing of the benteng Independance Museum of Yogyakarta, where the exhibition Black Armada / Armada Hitam is on display.