On 1 November 2014 the new Philips Wing of the Rijksmuseum in Amsterdam opens with her first photographic survey exhibition 'Modern Times. Photography in the 20th Century'  Among the outstanding photographers Germaine Krull, Joris Ivens’ first wife, of which a complete wall with 48 pages is showcased from her photo book ‘Métal’ (1928). This pioneering book  include many photos of The Bridge, shot during the filming of Ivens’s The Bridge.

Running from 1 November 2014 – 11 January 2015, 'Modern Times. Photography in the 20th Century' will be the Rijksmuseum’s first ever photography exhibition to showcase the outstanding collection of 20,000 20th-century works that it has amassed since deciding in 1994 to extend its photographic holdings beyond the 19th century.
Rare photographs by Brassaï, Ed van der Elsken, John Gutmann, Lewis Hine, William Klein, Jacques-Henri Lartigue, Joel Meyerowitz, László Moholy-Nagy, Eadweard Muybridge, Man Ray and W. Eugene Smith will be displayed as part of this exhibition. 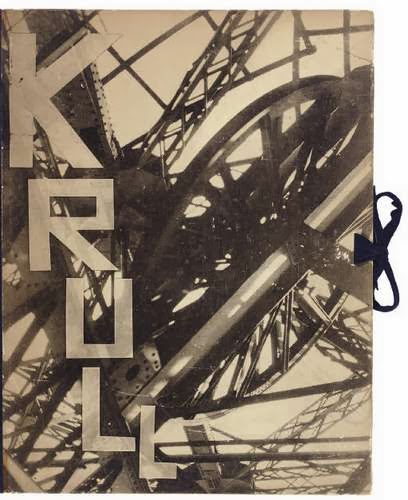 The series of pages from Germaine Krull’s vanguard photo album 'Métal' (1928) was published somewhere in 1928, after the first screening of Ivens’s The Bridge on 5 May.  Ivens’ film and Krull’s photo’s show striking similarities, on account of the same remarkable viewpoints, diagonal, in bird’s-eye-view or frog perspective, the same lack of human drama or a narrative, the same spontaneous way of shooting and a complete focus on metal. Thanks to this new attitude towards the surrounding world, without compromises, these two art works became both icons of modernity.
Ivens had met Krull in 1922 during his study in Berlin in the circles of his friend Arthur Lehning. Already during her Berlin years Krull showed not being afraid of making unconventional photos breaking set gender patterns. Subjects like female nudes, loving each others, or revolutionary politicians, were not common among female photographers. Ivens and Krull were deeply in love and in 1925 they went to Holland, Nijmegen and Amsterdam, to collaborate on various projects. Krull felt attracted by large iron harbour cranes at the Amsterdam harbour, probably inspired by photos of László Moholy-Nagy. She also made similar photos in Rotterdam, Antwerp and Marseille. When Ivens started filming the new constructed lift bridge, spanning the river Maas in Rotterdam, Krull accompanied him, shooting Ivens carrying out  daredevil feats on the higher parts of the lift bridge. At that time Krull already left Amsterdam settling in Paris. In April 1928 they married, but their love affair was finished. This didn’t stop their artistic relationship. Krull contributed to at least four films of Ivens; Études des mouvements à Paris (1927), Zeedijkfilmstudie (1927), The Bridge (1928) and Rain (1929).

The Ivens Archives is keeping a series of vintage photo’s of Krull, especially from this period. Next year a survey exhibition about her work will be shown at Musée Jeu de Paume in Parijs.

The exhibition'Modern Times. Photography in the 20th Century' runs until 15 Januray 2015.