‘The last good war’,  Ernest Hemingway called the Spanish Civil War, which affected Spain from 1936 to 1939. The artists taking sides by supporting the Republican government and by fighting on the battle field, continue to be a source of inspiration. Recently the American novelist Amanda Vaill published her book 'Hotel Florida. Truth, Love and Death in The Spanish Civil War'.  Joris Ivens is one of the protagonists in Vaill’s book thanks to The Spanish Earth for which he collaborated with the three loving couples who are at the centre of the storyline : Ernest Hemingway & Martha Gellhorn, Robert Capa & Gerda Taro and Arturo Barea & Ilsa Kulscar.

It’s a compelling story, based on extensive  research. Since Dos Passos fictionalized books on his contribution to The Spanish Earth, Stephen Koch's 'The Breaking Point' and the HBO-series Hemingway & Gellhorn this is already the fourth fiction centred around this group of artists.
Vaill's book received positive reviews:
'Not since Orwell's 'Homage to Catalonia' has there been so shattering a picture of the Spanish Civil war. A magistral work of biography and history, Hotel Florida recounts a heartbreaking story with precision and passion. Page after page, Amanda Vaill writes scenes you will never forget', writes Marion Meade, the biographer of Dorothy Parker, in a review. Even Stephen Koch writes: 'It's a moving story - and nobody has ever told it better.'
Paul Preston in The Guardian: ‘Amanda Vaill beautifully portrays three love affairs – including that between Hemingway and Gellhorn – but her book is marred by its cold war tone’ 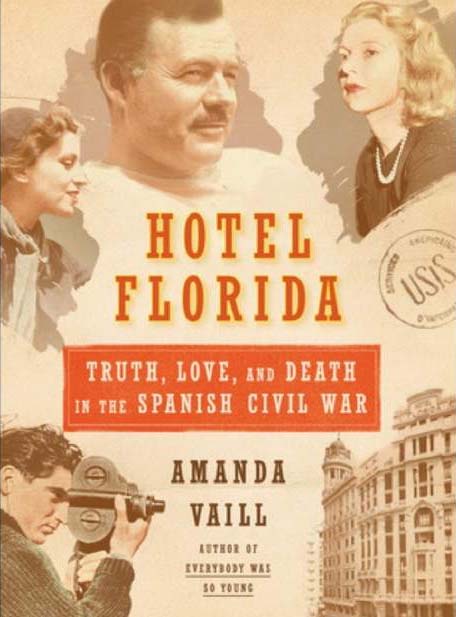